At the start of the 2014 season, we implemented our first version of the “Big Game Challenge” as a bonus to the already nice payouts of the Horseshoe Tour. Since then, it’s been tweaked and revised in order to find a way to keep it within our budget. After the 2015 season, we decided that we were going to have to make a major change this bonus to make it completely fit, or eliminate it all together, so to be able to continue providing this benefit to the players, we will attempt a new version, playing on the big games, and combining it with an old idea. This completely new system will be called the “Big Game/Points Challenge”. We have discussed this idea with our 2016 sites to give them the opportunity to make their tournaments even more attractive, but because there is some differences in funding at specific locations, our schedule will be updated to reflect single points, double points, and even triple points. This basically means that a big game, instead of representing a certain amount of money, now will relate to points, and at one site players could earn 1 point, 2 points, or 3 points, in a single game, depending on which event you attend. The way we determine a player’s number for the big games will remain the same (just one ringer over you NHPA average), but we will create a new points chart of 50 places for all forty and thirty foot players to compete for, (Open Division not included) with first place starting at $500 and descending to $42 for fiftieth place. We will keep the continuous points standings, and will list it on our website (www.thehorseshoetour.com), and updated after each event. We now will include all games pitched in any round, but because this includes the finals as well, it would not be likely we could have them available at the event itself, so big game stats will be tallied off the tournament scoresheets early in the following week and posted then. Once the standings are posted, just as before, it will be the player’s responsibility to double check results, and report any discrepancies to us immediately. We feel like the new version of the big games will solve a couple of concerns…..#1, to continue giving players a way to participate in the challenge, and #2, to give the tour a way to cap the payout. We are hoping our players will buy into this new exciting system, we think it will be a fun part of the tour, and rewarding in the end. The new chart will be posted soon.
The Tour Staff 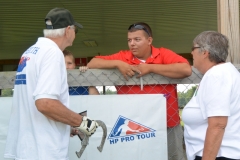